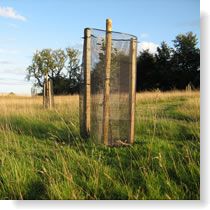 A culinary variety. Originally a natural seedling, which will grow on its own rootstock. Grown in the Vale of Aylesbury, particularly
near Aston Clinton, it was used in Luton to make dye for straw hats. Hat making at home was a rather cruel industry in North Bucks.

Bradley’s King (x1)
A large, late-season damson, purple in colour with sweet flavour. Ripe mid-September. It originated in Nottinghamshire in 1880.

Early Rivers (x1)
Introduced around 1830 under the name Rivers’ Early Prolific. Small, round fruit, purple in colour with a pale bloom, and sweet,
juicy, golden flesh, ripe at the end of July.

Farleigh Damson (x1)
Originated in Kent in the early 19th century. The heaviest-cropping damson, its fruit can be small but have a good flavour.

Merryweather (x1)
Raised by Merryweather Nurseries in Nottinghamshire and introduced around 1907. The fruit is quite large for a damson, having
plum in its ancestry, but it has the true damson flavour. Fruits ripen in early September.

Shepherd’s Bullace (x1)
Believed to be of English origin, first recorded in 1892. Round fruit, large for a bullace but smaller than the Langley Bullace.
Greenish yellow colour. Good for culinary use only.

Shropshire Prune (x1)
Became popular in the 18th century, having been first mentioned in 1676. Still found in many old fields, hedgerows and orchards
in the West Midlands. It crops regularly and the fruit has a good flavour.

Small Black Bullace (x1)
Known in England since the 16th century or before. This is really a wild fruit, variations of which are found growing in hedgerows.
Very small round fruit, having blue-black skin with a purple bloom. Firm juicy green flesh. Clinging stone. Acid flavour.
Recommended for jams. Small bushy tree with thorny branches. Heavy cropping.

White Damson (x1)
Possibly the white damson mentioned by Parkinson in 1629. Sweeter than most damsons.