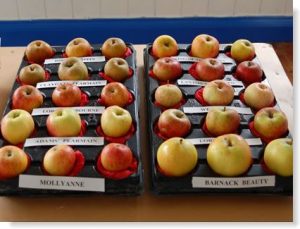 The details of the apple varieties can be seen below, with other fruits on the pages reached by following the links below:

Adams Pearmain (x2)
Originated in Norfolk about 1826. It has a rich, aromatic, nutty taste and crisp texture when fresh. Fruits are deep
yellow with red streaks. Attractive blossom.

Cellini (also culinary) (x1)
A mid-season dual-purpose apple raised in London in 1828. Stunning red apples with a sharp flavour.  Cooks to a cream
puree and can also be eaten raw with  pleasure if you like the flavour of aniseed.

Court Pendu Plat (x1)
An ancient French variety of russet apple blushed with red, first described in 1613, but more than likely older and may be Roman.
Known in England by the 18th Century. A late-season variety, which is picked from mid- to late-October in South-East England,
stored and at its best from December to January.

D’Arcy Spice (x1)
An old late dessert apple found near Colchester around 1785. Greenish-gold fruit with some russetting and with a spicy
nutmeg flavour. Crisp and juicy and best after a warm summer. Stores until May though it becomes softer with storage.

Ellison’s Orange (x2)
Dating back to 1904, raised by Rev. Ellison of Bracebridge in Lincolnshire. Crisp, juicy fruit with a rich, almost aniseed flavour.

Feltham Beauty (x1)
A handsome early-season apple, typically ripe in mid-August. Sweet and melting, tasting of summery freshness if eaten soon after
picking. Like all early apples it does not keep.

Gavin (Herts.)(x3)
Raised by Gavin Brown at Bayfordbury in 1956. Lightly aromatic, sweet and quite rich.

King of the Pippins (x1)
Also known as Reine des Reinettes, Golden Winter Pearmain and Prince’s Pippin. A multi-purpose apple, used for cider in
France and England, and for cooking in France as it keeps its shape. Firm flesh with a seet/sharp flavour. A reliable cropper,
with golden skin flushed tawny red.

Lady Sudeley (x1)
Firm yellow flesh and yellow skin streaked with red. Raised in Kent around 1849. This early-season apple is harvested from early
in September in South-East England and does not keep.

Langley Pippin (Bucks.) (x1)
An early apple raised in the late 19th century by Veitch’s Nursery of London, who had a fruit tree nursery near Langley in
Buckinghamshire. Slightly conical apples, with a deep crimson flush and juicy, aromatic flesh.

Laxton’s Royalty (x1)
A late dessert apple and a cross between Cox’s Orange Pippin and Court Pendu Plat, with the expected rich flavour.
Medium-sized fruit which is firm and juicy, and slightly sharper than a Cox.

Lemon Pippin (x1)
A very old apple, thought to be English or Norman. Oval fruit, with lemon yellow skin and flesh covering the stalk, giving
it the same shape as a lemon. Crisp flesh with a slight tang. Regarded as dual purpose in the 18th and 19th centuries,
when it was dried and used for tarts as well as being eaten for dessert.

Millicent Barnes (x1)
Raised in 1903 by Barnes of Chester, a cross between Gascoyne’s Scarlet and Cox. A delicious dessert apple with
greenish-yellow fruit flushed bright red.

Ribston Pippin (x2)
Raised at Ribston Hall near Knaresbrough in Yorkshire around 1707. Conical fruit, golden and slightly flushed red, with
fine russetting. Firm and juicy with intense rich and aromatic flavour. Said to have six times more vitamin C than a
Golden Delicious (and the highest of any apple).

Rosemary Russet (x1)
First mentioned in 1831. A late dessert apple, with greenish-gold skin flushed with orange-red and with fine russetting.
Pale cream flesh with a rich sweet/sharp flavour. A reliable cropper, with good blossom, and highly regarded. Stores until March.

Tom Putt (x1)
A very old English mid-season eating apple, an underestimated cooking apple and also used for cider making. Raised towards
the end of the 18th century by the Reverend Tom Putt, or by his uncle of the same name, and brought to the vicarage at Trent
near Sherborne, Dorset. Firm flesh when young, developing a complex sweet flavour reminiscent of pears when mature.

Voyager (Herts.) (x3)
Raised in Barnet in 1952. Sweet flesh with a rich, spicy flavour. Laxton’s Superb is one parent.

Welsh Russet (x1)
An enormous dessert apple, with pronounced russetting. Its origin is unknown. Slightly sharp, but not to cooking sharpness.
Not easy to bite, due to its larger size! Keeps well into March.

White Melrose (x1)
An old Scottish apple, introduced around 1830 by the monks of Melrose Abbey. Grown almost exclusively in the border counties
and very hardy. Large, tall, conical apples, with smooth, pale skin and red markings. A cooker that keeps some shape when cooked
and has a good sweet/sharp flavour; it is also a refreshing and mild sweet eater.

Alfriston (x1) A large, green, acidic cooking apple raised in the late 18th century by a Mr Shepherd of Uckfield, Sussex. Originally known as
Shepherd’s Pippin but renamed Alfriston in 1891 when it was sent to the London Horticultural Society by a Mr Booker of Alfriston, near Lewes,
Sussex. Received RHS Award of Merit in 1920. Grown commercially in the UK until the 1930s. Can be stored until April.

Annie Elizabeth (x1)
Also called Carter’s Seedling or The George. A late culinary apple, introduced by Samuel Greatorex of Knighton in 1857 and named
after his daughter who died aged 13 months. Large sweet fruits, keeping their shape when cooked and needing very little sugar.
Can be stored until April. Striking deep pink and maroon blossom.

Arthur Turner (x1)
Introduced in 1912 by Charles Turner of Slough, as Turner’s Prolific. An early cooking apple, ripe in September, which can be used
for most culinary purposes and needs little sugar. A good baking apple.

Crimson Newton Wonder (Herts.) (x3)
A colourful sport of the well-known Newton Wonder – which cooks to a creamy puree and makes good baked apples and mincemeat.
Crops well and stores until March. Dated to 1921.

Ecklinville (x1)
An old cooking apple from Northern Ireland, originating in Belfast around 1800. Very large cooker, with a flat round shape, soft white
flesh, which cooks well. Can be picked in August; keeps until November. Usually green turning yellow, but may go red in full sun.

Edward VII (x1)
A cross between Blenheim Orange and Golden Noble, dating from 1908. Once one of the most popular cooking apples. Large, fairly
juicy fruit which cooks to a cream puree and has a slightly acid flavour.

Golden Noble (x1)
Found in an old orchard in 1820 in Downham, Norfolk. A mid-season culinary apple with a deep golden skin and creamy flesh. It needs
little sugar when cooked, is delicious in pies and perfect with blackberries. By spring can be eaten raw. Was widely grown in Victorian and
Edwardian gardens as it makes a decorative tree with good blossom.

Hambledon Deux Ans (x1)
Also known as Green Blenheim. Discovered at Hambledon, Hampshire in the mid-18th century. A culinary apple with large, sweet, rich
fruit with a slightly dry texture. Cooks to a rich puree. Famous for its long keeping properties – it was said it could keep for 2 years.
Very long-lived trees with a spreading habit and pretty deep pink blossom.

Lane’s Prince Albert (Herts.) (x3)
Originated in Berkhamsted in the garden of Thomas Squire. He transplanted the tree to his front garden on the day Queen Victoria and
Prince Albert visited the town to change horses at the King’s Arms. John Lane, a grower in the town, introduced it commercially as
Lane’s Prince Albert in 1857. Large, shiny fruit, green flecked with red. Purees well, and by March becomes a dessert apple.

Peasgood’s Nonsuch (x1)
Raised from a seed in 1853 by Mrs Peasgood when she was a child living in Grantham, Lincolnshire. A mid-season culinary apple with very
large fruit, which cooks to a sweet, delicate puree and makes particularly good baked apples. Quite showy fruit, having greenish-gold skin
with an orange flush and broad red stripes.

The Queen (x1)
A highly regarded cooking apple, raised by Mr Bull, an Essex farmer, in 1858 from a pip of an apple bought at a local market. The juicy fruit is
large with a yellow skin, streaked scarlet, and cooks to a translucent gold puree.

Reverend W. Wilks (x1)
Raised in 1904 by Veitch’s Nursery in London and named after the vicar of Shirley, Surrey and Secretary of the Royal Horticultural Society from
1888-1919. Thought to be a cross between Peasgood’s Nonsuch and Ribston Pippin. A large, sweet, early to mid-season culinary apple, good
for baking and for puree, when it needs very little sugar. Sometimes said by professional cooks to be the best cooking apple of all.

Said to have come from a tree in Maidstone, Kent and known in the 18th century as the King Apple. Sent by Mr Warner to the famous
Hertfordshire nurseryman Thomas Rivers; Rivers renamed it Warner’s King and introduced it commercially in 1892.A very large cooking apple
valued for its rich flavour by the Victorians.

It is worth noting that the word “cider” has quite different meanings in the UK and North America. In North America fresh apple juice is known
as “cider”, whereas in England “cider” means fermented apple juice – which is known as “hard cider” in the USA. Thus most traditional English
“cider” apples cannot be eaten fresh, nor is their juice necessarily palatable when freshly pressed – they are grown solely for the production of
hard cider. English cider is traditionally produced using blends of Sweet, Bittersweet, Sharp, and Bittersharp juice.

Chisel Jersey (x1)
Green fruit, flushed red, with a bittersweet flavour. This vigorous cider variety originated in Somerset and the fruit is ready in November.

A traditional cider variety believed to have arisen in the 19th Century on the farm of Mr Ellis at Newton St Cyres, Devon. Grown widely in
the west country and Herefordshire. Medium sized red flushed fruit. Produces a sweet, astringent juice and medium bittersweet cider.

Kingston Black (x1)
A small dark red apple, originating in Somerset around 1900, which produces one of the best bittersharp juices.

Morgan Sweet (x1)
An old cider apple variety dating from around 1700, with fruit which is an attractive green/yellow colour, popular in the west country,
and sweet enough to eat fresh. The trees are large and vigorous.

Stoke Red (x1)
First came to prominence in Rodney Stoke in Somerset in the 1920s. The variety was also found to have been grown earlier at Wedmore in
Somerset where it was known as ‘Neverblight’. The fruit is small to medium sized, yellow skinned with a bright red flush. It produces a medium
bittersharp juice which ferments to a sharp, often scented, vintage quality cider.